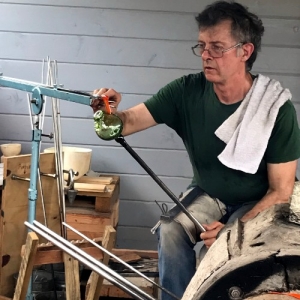 We (Mark Taylor and David Hill) have worked as glassmakers since 1989, moving to Project Workshops in 1994, and have devoted almost all of our time to re-creating Roman glass. In June 2001, we switched from making free-blown and mould-blown Roman glass to working full-time on mosaic glass for one year.

In our capacity as glassblowers we have appeared on several British national television programmes devoted to archaeology. We have also supplied glass to several of Ridley Scott’s films: Gladiator, Kingdom of Heaven, Robin Hood and Exodus.

In 2005, with funding from English Heritage and other sponsors, we began our Roman Furnace Project. This Project was continued in 2006, and has inspired other wood-fired glassworking furnaces elsewhere in the world.

During the early part of 2010, we moved to our new, more spacious premises at Project Workshops.

In 2011 we began to concentrate on 18th century English lead crystal glass – particularly baluster and twisted stem drinking glasses and goblets, as well as making the occasional contemporary piece.

In 2008 we began making a week-long visit each year to Velzeke in Belgium to work at a wood-fired furnace. In 2014 we began similar visits to the Villa Borg in Germany – often twice a year. At both venues we have been able to carry out experimental work in ancient glassmaking techniques as well as working with other like-minded glassblowers.

As well as undertaking private commissions (such as for the artist Grayson Perry) and making glass for films such as The Favourite and television programmes such as Outlander, we work on projects involving ancient and historical glassmaking and glassworking techniques, either at the request of others or as part of our own research. For example, we have reproduced the Ancient Egyptian Amarna Fish for the BBC and have made glass for the King’s Chocolate Kitchen at Hampton Court Palace. In 2016 we made a large quantity of sealed bottles for Montpelier, the home of James Madison, the fourth President of the United States, situated in Virginia, USA.

In 2019 we returned to building wood-fired furnaces. The portable furnace and lehr we built during the early summer was taken to Stourbridge, reassembled and fired over the week of the International Festival Of Glass in August.

In 2020 with the help of our landlady, Mandy Atkinson-Willes, we constructed a more permanent home for this and future wood-fired furnaces. We rebuilt and successfully fired the portable furnace and lehr during the summer, and will be continuing this project each year for the foreseeable future. We plan to replace the main furnace and to add a smaller furnace, as well as enlarging the lehr. This will give us the ability to run a wide range of experimental projects involving ancient glass as well as making glass for sale. Eventually we hope to invite guest glassblowers from the UK and from abroad to work at the furnaces.

In the pursuit of our work, we have attracted the interest and attention of many glass historians, and their help and support has been invaluable to us.